Truth by Olin Warner (1896) - bronze door, Library of Congress, courtesy Wikipedia.
In this image, Truth holds up a mirror and a serpent. She can look in the mirror to report faithfully what she sees or she can be tempted by the serpent to distort what she knows. Human nature has a tenuous link to truth. Company managers often bend the truth when reporting the results of their companies to shareholders and other interested parties. This is often related to the criteria for deciding their bonus payments. It is a bad business.
Investors are generally aware of the risk that exploration companies overstate their potential reserves and that new tech companies overstate their potential sales. What is more worrying is the cosmetic presentation of its accounts by a large, established company. Unfortunately, this is fairly common and it can dupe the investing public.
Vodafone is a case in point. This is its 'performance reporting' in the 2013 preliminary results.


A cursory reading of Performance reporting suggests that all is well with Vodafone. This is not the case.
Vodafone's 2013 GAAP (Generally Accepted Accounting Practice) earnings per share were 0.9p, not the 'performance' figure of 15.65p. Further, without the 6.5 billion pound contribution from Vodafone's 45% stake in Verizon Wireless, Vodafone would have made a pre-tax loss of 5.8 billion pounds in 2013. As Vodafone's management has no control over Wireless, a 5.8 billion pre-tax loss is a better starting point for reporting management's contribution than the 'performance' figure of a 10.5 billion profit. And see an earlier post at http://thejoyfulinvestor.blogspot.co.uk/2013_05_12_archive.html
It will not surprise the reader to learn that EBITDA (Earnings Before Interest, Tax, Depreciation and Amortization) and 'adjusted cash flow' (a figure not reported in the 2013 prelims) form two of the performance indicators for calculating the bonus payable to top management. Earnings per share do not. Most companies use performance indicators to calculate bonus payments, and it is always enlightening to see what the Board believes to be the most important measures of success.
The focus on EBITDA is dangerous, because it is a misleading indicator of a company's profitability. This is particularly true of Vodafone, which has a long history of taking huge charges for goodwill impairment (26 billion these last 5 years). And Vodafone cannot survive without spending large sums on capital expenditure (6.2 billion pounds in 2013), which also gets written down. Neither is included in EBITDA.
This selection of favourable 'adjusted' figures enables Vodafone's CEO to write, “Thanks to further strong progress this year in our key areas of strategic focus − data, enterprise and emerging markets − and an excellent performance from VZW, we have achieved good growth in adjusted operating profit and adjusted earnings per share." Adjusted is the operative word.
The following table would be my starting point for evaluating the business actually managed by Vodafone's management. I have excluded 'Other income' as it includes foreign exchange gains and losses and the profit on the sale of assets. Neither are core management activities. Instead of the 71 billion pounds EBITDA, management should be concentrating their efforts on the negligible profitability of the non-Wireless business these past 5 years.

Vodafone makes much of 'free cash flow', but it is a flawed measure of a company's cash generating capacity when that company requires sizeable other outlays to keep going. Vodafone is repeatedly required to make license and spectrum payments, but these expenses are not included in Vodafone's definition of 'free cash flow'. Once these are deducted, Vodafone's free cash flow of 5.6 billion pounds falls to 3.1 billion pounds. This is insufficient to cover the dividend payment of 4.8 billion. Wireless came to the rescue with a 2.4 billion pound dividend payment to Vodafone in 2013.
The lesson for the investor is:
1. Do not trust headline reporting by management. Unfortunately, the financial press and blogs tend to use the same figures. Management's figures are at hand and many journalists do not have the time to check them.
2. Whenever you see the adjective 'adjusted', work out what the adjustments are. Do they make sense? Or are they merely a way to make management look better?
3. Free cash flow is useful, but it is calculated in differing ways and is company specific.
4. There is no substitute for studying the consolidated accounts and relevant notes to the accounts.
5. It is worth reading the Chairman's, CEO's and CFO's reports in the annual report. Self-congratulation when business is not going well is a sign of worse to come. An honest appraisal of what needs to be done is a sign that it might actually happen. 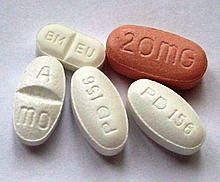 
Glaxo is the 7th largest pharmaceutical company in the world by revenue. Considering the growing proportion of spending on healthcare worldwide, it is disappointing that Glaxo has made so little financial progress these last 10 years. Consider:
1. Revenue has increased by an average of 2% a year since 2003. And it has actually declined by 7% since 2009.
2. Profit after tax in 2012 (4.7 billion pounds) was the same as in 2003 (4.6 billion pounds).
3. Shareholders' Equity has barely increased over the decade.
Glaxo has had to contend with the expiry of its patents and the consequent competition from generic drugs. It is increasingly difficult to discover new drugs and the cost of getting them approved by America's Food and Drug Administration has escalated. In the last few years, austerity has hit European market. The 4-billion pound US legal settlement for the side effects from taking Avandia for diabetes, with the consequent loss of market share, was a further blow to the company. Sales to the US are down by 11% since 2003.
Management has not been idle. The 2005 Annual Report was titled New Challenges: New Thinking. In 2008, Glaxo identified a new strategy based on:
1. Grow a diversified global business: to move away from the traditional 'white pills and western market'. Revenues from outside Europe and America have grown from 31% of the total in 2003 to 41% in 2012. And the company has developed a big vaccine business.
2. Deliver more products of value: to concentrate R&D on the most profitable sectors and increase productivity. It is difficult to evaluate the success of this strategy.
3. Simplifying the operating model: the prime objective was to make annual cost savings of 2.2 billion pounds by 2014. In 2012, the company reported that it had made 2.5 billion in annual savings.
Management has leveraged the company to buy back shares and pay for the new strategy. Glaxo is, as a result, weaker financially now than in 2003. In 2003, Glaxo had net cash of 1.6 billion pounds; in 2012 it had net debt of 14 billion pounds. It would take more than 3 years of free cash flow to pay it back. In 2003, the dividend was covered 1.68 times by free cash flow; in 2012 this had fallen to 1.23 times (after excluding the payment of 2.7 billion in legal expenses).
Return on equity (ROE) has also suffered. While the historical ROE was 82% on 2003's unleveraged balance sheet, the average return on retained earnings since then is but 7%. This helps to explain the lack of growth in earnings. Earnings per share have increased by 10% these past 10 years only because Glaxo has bought back 15% of its shares in this period.
With no real growth in its business, but with a steady cash flow that can be relied on to pay dividends for the foreseeable future and with an A+ credit rating for long-term debt, Glaxo shares resemble a bond more than a common stock. Perhaps this explains its current rating.
Glaxo's shares, like its UK competitor Astra-Zeneca, have risen substantially more than the FTSE-100 in recent months. Both have outperformed the FTSE 100 handily since 2008. And both weathered the financial crisis well, reflecting the stable nature of their businesses.


Glaxo shares are currently rated on an historical PE ratio of 19 and they yield 4.2% at 1765p. The 5-year earnings model for Glaxo gives a value of 1250p a share, assuming a discount rate of 8.3% (3.3% investment grade corporate bond and I add 5% for risk and a profit).
The cautious investor will note:
1. Glaxo shares have increased in value by 34% since November 2012 (from 1314p a share).
2. The PE ratio of 19 cannot be justified by a company with essentially no growth.
3. In the search for yield, the present 4.2% yield on Glaxo shares could well be the overriding attraction for the stock. If corporate bond rates increase significantly, or if Glaxo's dividend is seen to be vulnerable to a cut, the shares could lose this premium rating. For years Glaxo traded on a PE in the 9-12 range.

Posted by The Joyful Investor at 20:45 No comments:

The Joyful Investor
United Kingdom
Richard Crosfield has been investing in the London Stock Market since 1975. He has worked as Finance, Marketing and Managing Director in engineering, publishing and direct marketing businesses. He holds an MBA in Finance from Columbia University. The Joyful Investor is a commentary on investment techniques and individual stocks for the thoughtful investor interested in reaching his or her financial goals over the longer term. While occasionally it will comment on special situations, trading techniques are left to others. The Joyful Investor may be invested in any of the stocks mentioned in this blog. Disclaimer: This blog is not intended to give financial advice. Before investing, do your own research and consult your financial adviser if appropriate. The accuracy of any information included is not guaranteed and may be subject to conjecture or interpretation by The Joyful Investor. Visitors should validate all facts using alternative sources where possible. Copyright: Richard Crosfield affirms his copyright to the posts on this blog. Any reproduction must cite this source.